Over the past few weeks, we’ve been diving into the world of important inventions from the past. Whether these inventions are still in use today or they have been succeeded by an improved design, they laid the groundwork that has led to many more developments over the years including 3d modeling, CAD design, AI implementation, etc.

However, for now, we’re going to turn our eyes to the 21st century. Although we are still in the century’s nascency, that does not mean there haven’t been incredibly impactful creations that have changed our society. Do you think you have the next great invention in your head? Call Glober Design to learn how we can help bring it to life. Here we will cover the best technological inventions of the 21st century. 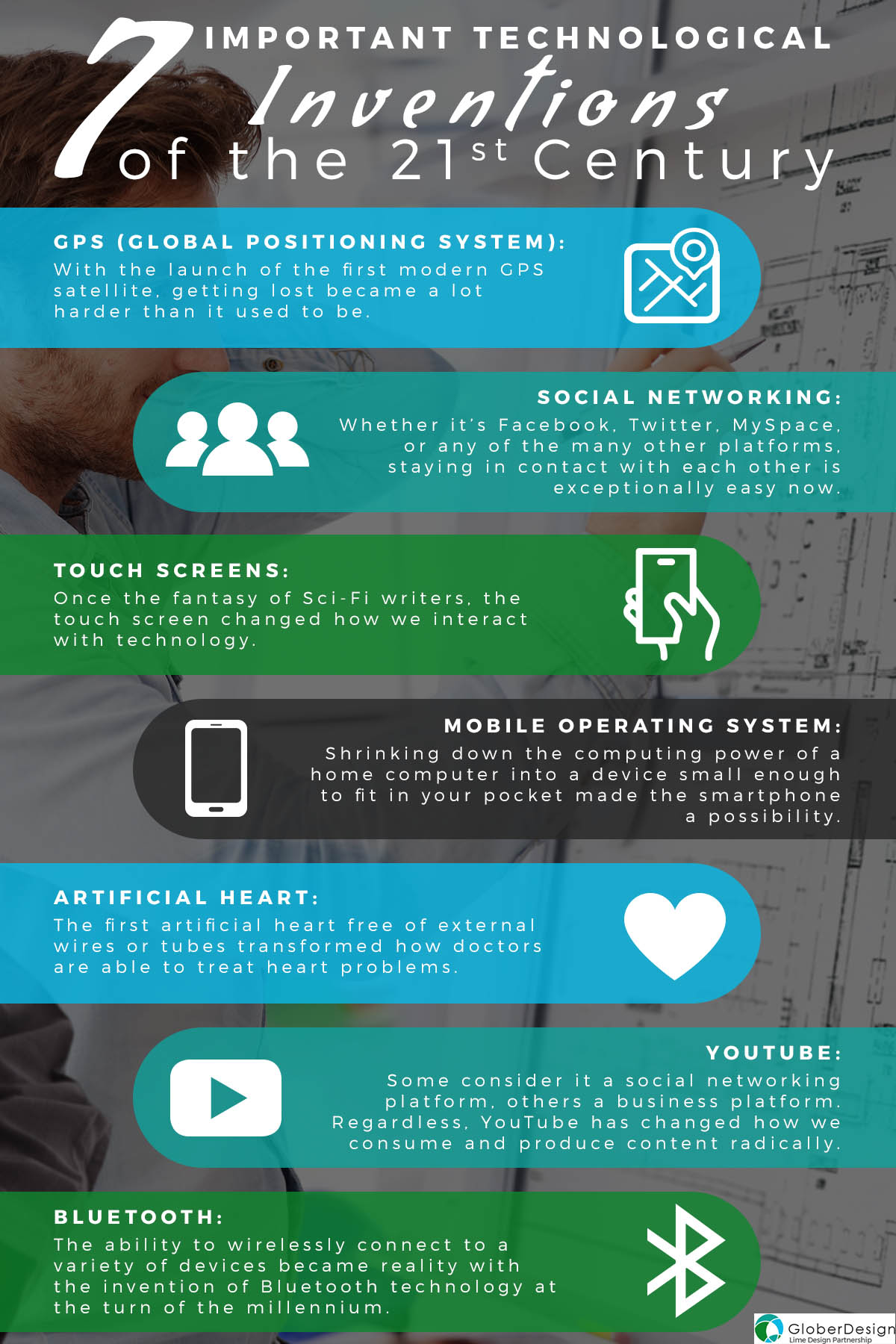 GPS is one of the greatest inventions of the 21st century. Why? let’s see. Not so long ago, if you were going for a drive to a place you weren’t familiar with, you had to pull out a map of the area from your glovebox and plan everything out yourself. This often led to many wrong turns and declarations of “No, I’m not asking for directions!” With the launch of the first modern GPS satellite in 2005, that all changed.

Although GPS was initially developed back in 1974 by the US Department of Defense, that satellite made it accessible to the general public. It has only become easier to use over that time, with more and more people having GPS-enabled phones along with them at all times. Now, you just have to hope that Siri tells you where your turn is in time for you to make it!

This may be more nebulous than some of the prior inventions we’ve looked at in the past, but the advent of social networking has had an incredible impact on our society as a whole. What originally began as message boards, forums, and platforms, like Friendster, has evolved into an industry worth billions of dollars.

Beyond that, the impact of new inventions like Facebook, Twitter, Tumblr, and Instagram have changed how we are able to communicate and stay in contact with others. With that said, social networking is not without its dark side, as it has also given a platform to people who only want to put hateful sentiment out into the world. As with most inventions, the positives and negatives make social networking a true double-edged sword.

If you watch Sci-Fi movies from the 70s and 80s, you might notice something that doesn’t seem all that out of place in our daily lives. Touch screens used to be a fantasy imagined by authors trying to paint their picture of a futuristic world.

Whether that inspired the development of the real product or it was created purely out of an idea product design engineers had, the touch screen has been implemented into everything from phones and computers to printers and video game systems.

This makes it possible to do just about anything you want, all in the palm of your hand. With the advent of mobile operating systems, smartphones came into being and totally changed things. It also has the uncanny ability to bring to a halt an argument in a bar about if that guy was actually in that movie or if you’re just thinking of the other guy that kinda looks like him. Those fights used to last for weeks!

A very serious and incredibly important invention, the artificial heart was previously thought to be impossible. It was first implemented in 2001 and stunned people with its design not requiring any external wires or tubes to operate — which was previously necessary for a heart replacement.

The first version, although successful, was ultimately limited. Its successor was able to operate for up to five years. Doctors are still working to improve the artificial heart, with the hopes it could one day outlast a human lifespan., so there’s no worry about it giving out prematurely and killing a patient.

While some people lump YouTube in with social networking, others have utilized it as a business opportunity and it is one of the best 21st century inventions. The invention of YouTube seems almost quaint when you consider how much it has grown. Initially developed as a platform to share family vacation videos, with the first video uploaded is one of the creators visiting the zoo, it would balloon to include a wide variety of content to fit whatever you might look for.

Entirely new industries were created thanks to YouTube, with gamers streaming their “Let’s Play” videos, toy fans unboxing the latest action figures, up-and-coming chefs teaching people how to cook, and beauty aficionados showing how to apply makeup and do your hair. You can even get to know how Professional Concept Sketches work by searching on youtube. YouTube opened up a world where everyone could become a video star, much to the chagrin of the radio star.

Originally debuted in late 1999, Bluetooth didn’t hit the market until the year 2000. This new technology invention made wireless connections incredibly easy in a way that was previously thought to be unfeasible.

Although its beginnings were limited, the development of Bluetooth was instrumental in a wide range of creations to make our world more connected. This has developed into what is called the ‘Internet of Things, where all electronic devices are connected and able to communicate with each other. Many people believe that without Bluetooth, we wouldn’t have gotten Wi-Fi, and what would coffee shops be able to offer for free to entice customers without that?

With every passing day, technological advances are made that have the potential to change the world. The aforementioned best technological inventions of the 21st century are the proof of that claim. Even something like HDTVs, which have now been surpassed by 4k TVs, show the constant push to innovate and make something new that changes how we perceive the world around us. An invention can be something small, that just solves one problem that people have, or it can be world-changing like the ones we’ve discussed today.

No matter the size of your idea, big or small, Glober Design can help you make it into a reality. From start to finish, design patent services to manufacturing, we’ll be more than happy to help you through every step of the invention process. Don’t wait for someone else to take your idea; make it happen yourself! We hope to hear from you soon.